If you see some familiar names and faces behind its production, that’s because we’re freshening and localizing the former UpCountry Magazine to give it a more distinct Vermont feel.

Early last year, we were bought from our former sister media outfit in the Berkshires, which gave the newly formed Vermont News & Media a chance to reposition the magazine as something Vermont could call its own.

First off, we’ve changed the name to Vermont Country magazine. This capitalizes and focuses more on Vermont, and better describes its geography of coverage, while still paying homage to our award-winning roots with UpCountry magazine.

You’ve probably noticed that we now come with a cover price tag of just $4.99. Vermont Country is moving to a full subscription model, with the magazine included with a subscription to the Bennington Banner, Brattleboro Reformer, or Manchester Journal. An annual mailed subscription is $25 for six issues. To subscribe, email us at info@vermontcountry.com

Displays of Vermont Country magazine will be available at preferred partner locations, where residents and visitors can pick up a complimentary copy, provided by the location as a courtesy to its customers. These preferred sites include restaurants, hotels, B&Bs, ski lodges, golf courses and more. Look for a full list in upcoming issues of Vermont Country magazine, or online at www.vermontcountry.com.

With Vermont Country, we’re putting a more hyperlocal focus on Southern Vermont, the Green Mountain lifestyle, events, attractions and culture. We’re keeping our personality profiles — Person of Interest — that feature some of our best-known Southern Vermont residents, as well as our movie reviews from the irascible Dan Tebo.

For this edition, we’re giving you a real taste of Vermont from the throes of maple syrup production to epic fails on backroads during mud season. We’ll take you rock climbing, stuff you with ideas for niche Vermont foods, give you a cure for cabin fever, get up close and personal with cross-country skiing legend Bill Koch and much more.

We hope you enjoy this kick-off of the new Vermont Country magazine, and we’ll aim to take you deeply into the Vermont way of life and the lives of those who keep the region ticking.

Send your thoughts, tips and letters to the editor to info@vermontcountry.com

Vermont Country Magazine is a publication of 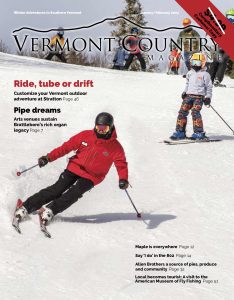